It’s a good time to get nostalgic about anime and manga at the moment. Right after Fruits Basket got a sequel series, my other favourite manga series Cardcaptor Sakura is also getting a sequel, to coincide with the manga’s 20th anniversary, and the first chapter has just come out in Japan.

Cardcaptor Sakura is one of Clamp’s most popular series and along with Sailor Moon, it was one of the defining series of the magical girl genre until Madoka came along and turned it super angsty.

I’ve been re-watching the anime lately and it not only still holds up (the only thing that has become outdated is the bulky cell phones), its portrayal of LGBT+ characters was amazingly progressive for a late 90’s show, something that western animation is still struggling to get to grips with. The general rule of Cardcaptor Sakura, and with Clamp manga in general, is that love has no boundaries such as gender, age, or whether a person is technically human. While this does provide a few questionable student/teacher romances, it’s rare to see a series where sexuality and gender identity are treated in such a way. Touya and Yukito were probably the first yaoi couple I knowingly shipped like crazy (I shipped other guys as ‘friends’ thanks to section 28) and it took me this long to realise that Yukito is technically non-binary. If you throw in his alternate form Yue, does that technically make it a polyamorous relationship? 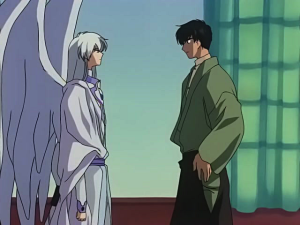 Always date a person whose hair is longer than their body.

The plot of the original series was about a precariously cute little girl named Sakura who discovers a book of magical cards called Clow Cards in her father’s library and accidentally sets them all loose. She has to become the Cardcaptor and use her growing magical powers to get them back and stop them causing mischief throughout the town, all while trying to get the cute boy she has a crush on to notice her.

The Clear Card arc picks up almost exactly where the manga left off; on Sakura’s first day of middle school when she and her long distance boyfriend Syaoran are finally reunited and can finally be together forever. But on the same night, Sakura gets another of her prophetic dreams about a mysterious figure in strange clothes, indicating that a new supernatural thereat is on its way.

Even if Sakura has only aged up a few years in the story’s timeline, there is still a strong feeling of ‘my daughter is all grown up’ for the reader. It’s refreshing to see all of the characters again in their original forms, and not with all the Tsubasa alternate dimension self weirdness (sorry Clamp fangirls, but I really didn’t like Tsubasa). Tomoyo, Sakura’s loyal best friend, is hilarious as ever when she films Sakura and Syaoran’s touching reunion and for some reason I find it funny that Kero, a magical creature who has lived for hundreds of years, has an e-mail address.

Perhaps it is because the characters are getting older but something still feels slightly off with this first chapter. Sakura and Syaoran aren’t quite as lovey dovey as you’d expect of a couple who have been separated for years. They even re-exchange their homemade teddy bears, which in the original manga were a symbol of their love for each other. I really worry that is some kind of horribly foreshadowing. There is also a notable absence of Yukito, despite being a major character and presumably an official couple with Touya by now. Perhaps there just wasn’t enough time in the first chapter to introduce him along with everyone else.

Even so, all of these new questions are intriguing. The series has been able to develop itself while still keeping with the spirit of the original. I’m looking forward to the next installments of the story arc and seeing what is going to happen to Sakura and her friends from here.

I’ve already written several posts on my blog about tired old romance clichés such as love at first sight or love triangles and how they usually don’t work unless they are handled in the right way by a good writer. I have put together a list of other love stories that I also hate and want to see less of. If you have any of these in your own novel then it might be time for some re-writes.

Don’t get me wrong, I’m all over stories where the power of love wins through despite all odds. But when the day is saved with no explanation other than ‘its true love’, or if this is the only justification for a couple getting together, that’s just lazy writing. 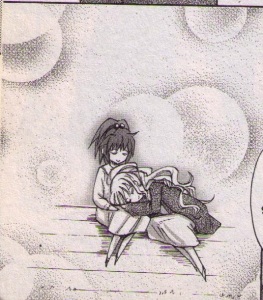 Not to mention all phobias and mental illnesses. A supportive partner can help somebody to deal with these issues but they can’t make them magically go away completely. It is much better to see a love interest helping someone learn to live with whatever troubles them rather than making them forget about it completely and live in a world of sunshine and flowers.

Once again, I feel this is a plot which can kind of work if it is done in just the right way, but it is rare to see it pulled off successfully. There needs to be a legitimate reason why the couple stops hating each other and begins to like each other but many stories skip straight over this necessary development. Most of the time, I feel like it is a way to draw out unnecessary conflict.

This is the idea that a boy and a girl are going to be romantically involved only because they appear in a story together. Especially horrible is when the only female character in the whole story is expected to get together with the male hero, no matter how badly suited they are to each other. Just because centuries of outdated storytelling says that the woman is expected to be the love interest, it doesn’t mean that she should be.

Or the fictional universe at least. This is a version of the above mentioned trope when the token gay character gets together or at least flirts with the only other gay character in the story. They’re gay so they have to like each other, right? Even if being gay cuts down the number of potential love interests for them, that doesn’t mean they have to hook up with somebody just because their sexualities happen to match up.

‘But you both thought you were straight ten minutes ago!’

I call it this because it seems to show up a lot in yaoi manga, but it appears in other media too. This is when a guy falls in love with another guy (or a girl for another girl, but it is usually the male example) despite having no prior attraction to any other men. There’s nothing technically wrong with this because sexuality is a complex thing and apparently it can happen in real life. I know a few women who I would happily throw away my heterosexuality for. But these stories are never about the guy coming to terms with being bisexual or labelling himself as such. It’s still ‘I’m in love with a man but I’m still technically straight so it’s all ok. No need to panic, Middle America!’ It is starting to dwindle even in yaoi manga but still crops up far too much for my liking.

Usually tied in to the ‘chasing someone through the airport’ ending, which I have also put on my list of clichés which really must die. I hate it when a woman (yes, it’s still always a woman) gives up a dream job which most people would kill for and which she’s been working hard on for years for the sake of love. Too many writers still haven’t realised that settling down isn’t the ideal ending for every woman or the end of her career goals.

What love stories or romance tropes do you think are overdone or should never have existed to begin with? Which are most likely to turn you completely off of a love story?