There is a reason why most love stories end at the ‘happily ever after’ part; after we’ve seen the couple finally confess their love or defeat the obstacles which were preventing them from getting together, we like to believe that they skipped merrily into the sunset and never had any problems ever again. We don’t like to acknowledge that in reality, even the most loving relationships can still have problems, and most don’t work out at all. It doesn’t help that most couples in fiction who are supposed to be a representation of true love wouldn’t work out for very long in the real world. This leads to many writers depicting a long term couple as boring, relying upon old stereotypes, or piling unnecessary drama upon them.

As someone who has been in a long term relationship for nearly 12 years (I’m only 28, by the way), I can tell you that there are ways that you can write one and make it just as interesting and heart-warming as a couple who have only just gotten together. Here are a few top ways:

Rather than using a string of soap opera melodrama to test the couple’s relationship, it is much better to show them going through realistic and relatable issues. This could be health problems, issues with their families, or the stress of raising a child. These are the real tests of a relationship which determine if it will last. Readers will respond to them much more than yet another forced temporary breakup.

For instance, in My Little Pony: Friendship is Magic, Princess Cadence and Shining Armour are supposed to be the literal embodiment of romantic love, but they were criticized for being too perfect. In recent seasons they had a baby, Flurry Heart, and had to deal with the stress of caring for their first child, which turned opinions on the characters around and suddenly made them much more realistic and grounded. 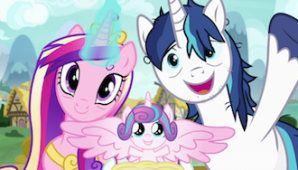 Animated ponies are more relatable than most soap opera characters

Author Gary Chapman theorised in his book The Five Love Languages that there are five ways that couples show love for each other, and that we need all of them, not just one or two, to make a relationship work long term. These are gifts, quality time, words of affirmation, acts of service, and physical contact. Ensure that your fictional couples use all of these to show how their relationship remains strong.

Leave out the arguments

I for one am really sick of the so-called joke of two people arguing ‘like an old married couple’ as proof that they are a perfect couple. It is true that even the best relationships do involve arguments over petty things such as leaving the fridge door open or who was supposed to take the dog for a walk. We all get stressed at times or make mistakes so it is inevitable. But readers don’t want to be reminded of these disputes when they are indulging in escapism, so it’s best to leave them out of your fiction.

Have the relationship evolve

One of the things I love about the Japanese anime My Love Story is that the love confession scene, which would be at the end of any other anime, happens in episode three out of 24. The rest of the show is dedicated to the two figuring out their first major relationship by going on dates, setting up their friends, and getting to know each other’s families. It goes to show that you can definitely have a romance story arc that doesn’t end after ‘I love you’.

For decades, mainstream television was under the apprehension that arguments and constant disagreements are a normal, and even preferable, part of relationships. But attitudes towards marriage, divorce, and family have since changed, so when modern audiences look back at these old shows, they usually say ‘but why don’t that couple just get divorced?’

Today’s consumers aren’t accepting of actions that can be interpreted as abusive and are bored to tears of nagging wives babysitting their lazy husbands. Many of them might have even grown up in these types of households and have experienced first-hand why they are so destructive in real life. So no matter what, don’t make your readers question why your couple ever got together in the first place or why they are accepting of a miserable living situation.

Write them as characters

In cartoons it is normal to have stock parent characters who are only ever referred to as ‘Mum and Dad’ even by other characters. Am I the only person who has noticed how weird that is? But you hopefully aren’t writing this type of story. You want to write your long term couple or parent characters as people, not stick figures. Give them backstories, goals, likes and dislikes, and everything else you would give your protagonists and they will become some of the most memorable and lovable characters of all. 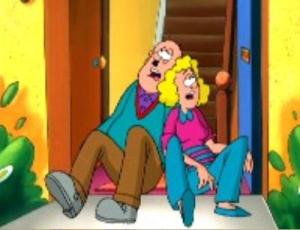 20 years later and I’m still trying to figure out their names.

My fiancee and I showing great trust in each other.

It can be difficult writing romantic moments to show a couple’s developing relationship as many of these moments have become so clichéd and overdone that they have lost all of their impact. Not all of them are necessarily bad. It’s still sweet to read about your favourite fictional couple sheltering from the rain together or raising a baby bird like it’s their own child. But modern fiction still needs more original and more realistic moments to show that a couple are in love. Here are some to get you started:

Use instead of: Girl falls for guy after he rescues her. When this happens in a story, it’s seen almost as a crime if the girl doesn’t fall madly in love with him as thanks for saving her.

Use instead of: Being forced into every situation together. Stuck in a broken lift? Forced to do a report together? It probably won’t turn hatred into love as years of romantic movies have told us. It’ll probably just make them hate each other even more.

Use instead of: Make up sex. Seriously, does anyone actually do this? An emotional argument is probably the least sexy thing ever. Aren’t you just using sex to ignore your issues?

Use instead of: Cooking dinner together. My parents said that they would end up getting divorced if they ever tried cooking together. It’s not quite as romantic and cute as sit-coms will have you think.

Use instead of: ‘I have a fear of heights that is instantly cured so that I can go on the ferris wheel with you.’ Sorry to tell you this but true love isn’t an insta-cure for all phobias. It’s not going to be very romantic if one person is secretly terrified.

Use instead of: Forcing a shy person to ‘come out of their shell’. Forcing  someone into a situation that they’re uncomfortable with is going to do them much more harm than good and drive them away from the person you’re trying to hook them up with. If they really must open up more then it must be done gradually with gentle encouragement.

Have you ever heard of cuteness aggression? It’s when you see a baby animal that is so unbearably cute that you quite literally want to hug it to death. I often feel this way towards my fiancé, which is a little disturbing if you think about it…

Use instead of: Finding each other irresistibly sexy. Couples do need to find something physically attractive about the other, but you don’t want to imply that sexual attraction is the only reason they like each other.

I’ve never really thought before how often my fiancé and I give each other advice about careers, family, or life in general, but it helps us both through a lot of tough situations.

Use instead of: Asking friends for ill-informed relationship advice. It will inevitably lead to misunderstandings that will almost doom the relationship but it will all be fixed at the last moment and the idiot friend will receive no repercussions for almost breaking up a loving couple.

Use instead of: The ‘s/he stole food from my plate’ relationship dilemma. Did the fact that you’re going on dates not tip you off that you’re in a relationship? And does it really matter if someone you’re dating takes food from your plate?

Use instead of: Watching sappy romance movies together (and the guy hating it). It’s not treated as ‘sitting through a film I hate for my partner’ so much as ‘my wife is forcing me to watch a film I hate’. I also despise the guy making a girl watch a scary film she can’t stand just so she can cling onto him when she’s scared cliché. It borders on emotional manipulation.

Use instead of: Can’t form coherent sentences around a crush. How can characters form relationships if they can’t even communicate with each other coherently? It makes it hard to get to know anything about each other.

Use instead of: Kissing in the rain. Why is this such a big thing? Has anybody ever had a decent kiss while being drenched with rain? Potentially catching pneumonia doesn’t seem that romantic to me.

If this isn’t the ultimate act of true love then I don’t know what is.

Use instead of: Chasing someone through the airport. ‘Being with me will make you so much happier than moving on with your life and pursuing your dream career! Whoops, is that airport security behind me?’

What other supposedly romantic moments do you think have become clichéd? What do you think make better alternatives?