It’s been a very long time since I’ve done a review on this blog, but after seeing this manga at the library in my new town, I knew I had to tear it to shreds. I’m just evil like that sometimes.

Strawberry Panic is a yuri series about the various romantic relationships of a group of students attending three affiliated catholic all girl’s schools. It started life as a series of short stories in Dengeki G’s Magazine with couples decided by reader polls. Their success was followed up by light novel, visual novel, and a manga adaptations and then an anime series. It seemingly wasn’t until the anime adaptation that the series developed any plot, character development or charm. (I haven’t read the light novels but they sound fairly good too.) This volume of the manga reads like a terrible fanfiction; just a bunch of gooey, pointless romantic scenes all squashed together with only the barest hint of a plot holding them all together. The characters are even described as typical Mary Sues with ‘ivory hair’ ‘porcelain skin’ and ‘goddess like beauty’. 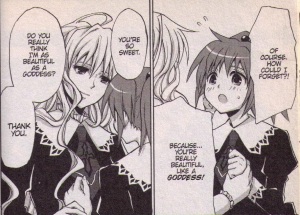 The first volume starts the same as the anime with new student Aoi Nagisa getting lost on her first day at St Miator academy and becoming instantly enamoured when she runs into the beautiful and mysterious Hanazono Shizuma. She is the ‘Etoile’ who is basically like the royalty of the three schools. The story then quickly cuts to a week later when Nagisa has to accompany Shizuma on their assigned duty to collect holy water for the Easter celebration. The nuns must have been waiting for that holy water until Christmas because almost half of the book is the two of them wandering around to various places along the way and getting into random ‘romantic’ scenarios. They even have one in the middle of a crowded classroom, during class! Was the sister just sitting at the back playing Angry Birds while this was going on? 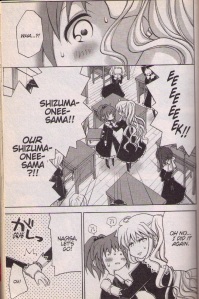 The catholic school setting of this series has always confused me. I think it might have been for the ‘forbidden love’ angle but considering that virtually every character in this series is a lesbian and the staff never seem too bothered with the various lesbian couples, possibly even encouraging them to get together, their relationships hardly seem forbidden. The sister in the manga even says ‘the student going with you today will have an “eventful” time, won’t she?’.

‘Now girls, no lesbian sex while class is in session. Save that for mass this evening.’

Yes, the sisters of this school are fully aware of all the lesbian sex that is happening all the time and don’t even care! Maybe this is set in a world where Catholicism is more lax on these things, but then why include the catholic school setting in the first place then?

All this stupidity distracted me from the story, what little there is. Nagisa and Shizuma seemingly forget all about their classes or the holy water and go to the library, where the students all meet up for ‘liaisons’. There’s a really weird scene between two supporting characters, Hikari and Yaya, who are there to spy on Hikari’s crush, a popular girl named Amane, who is so popular she is nicknamed ‘The Prince’. Yaya has a crush on Hikari and randomly starts touching her up. And then we go back to Nagisa and Shizuma and the scene is never mentioned again! This will happen a lot in this manga, in fact the whole thing is basically random seduction scenes that are dropped and never brought up for the rest of the story. 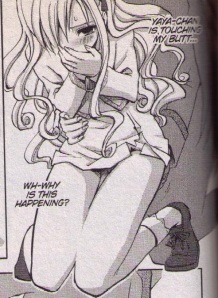 About half way through the manga suddenly remembers it has a plot and there’s a long tedious dialogue about the upcoming Etoile elections, but it’s still nothing more than a bunch of random scenes spliced together that go nowhere.

Meanwhile, Nagisa’s best friend and room mate Tamao has come to find Nagisa and Shizuma. I assume they spent so long fetching the holy water that everyone thought they had died. Tamao and Nagisa’s relationship is basically an expy of Sakura and Tomoyo from Cardcaptor Sakura, minus all likability. Tamao has a huge crush on Nagisa, who remains oblivious despite Tamao’s rather…disturbing attachment to her. While this was mostly played for laughs in the anime and you could still admire the close friendship between the two, in the manga it’s downright creepy. If you thought Tomoyo dressing up Sakura and video taping her was weird, then stay away from this manga.

Tamao stumbles upon Nagisa with Shizuma and assumes that they’ve already done it, and with the amount of time they’ve been away it’s understandable that she’d make that assumption. But Nagisa cheers her up with a cheesy ‘we’re such good friends yay!’ scene that still sounds like it came out of a poorly written love confession.

To halt Tamao’s advances towards Nagisa, Shizuma announces that she’s going to enter the Etoile competition with Nagisa and then just leaves, so Nagisa doesn’t really have any choice in the matter despite being the supposed main character.

While in the anime Nagisa was naïve and clumsy, she was also kind, cheerful and actually called Shizuma out on her actions. In the manga she feels like nothing more than a Barbie doll who cares more about how pretty her uniform is than anything else, with dialogue like ‘Hymns sound kinda cool!’. She just drifts from scene to scene and lets things happen to her rather than have any actual say in them. ‘Nagisa, you’re my lover now.’ ‘Nagisa, we’re entering the Etoile competition now.’ ‘Nagisa, we’re going to fight an army of orcs now.’ 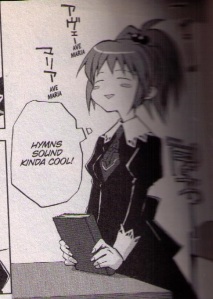 After all that, I’m not sure they even delivered the holy water…

The last chapter switches focus to Hikari and Amane, who were by far my favourite couple in the anime. Too bad their sweet, emotional story is a copy of Nagisa and Shizuma’s, except with more whining and George Lucas esque dialogue. 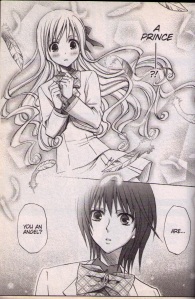 The Etoile entrants are announced and Amane isn’t happy with who she’s been paired with. The book ends on a sort of cliffhanger, teasing the identity of who Amane’s partner is, but since this hasn’t been foreshadowed at all I’m sure it’s not that exciting anyway.

I feel bad comparing this manga to a fanfic because there are tonnes of fanfics that are much better written than this manga. It’s just fluffy spank material with no substance to it at all and barely any effort put into the writing. I found the second and final volume in the library as well so I’ll be reviewing that next week. I just really want to know if they finally deliver the holy water…

I'm an author and Finnish language student living in Ylamylly, Finland with my husband. I write mostly YA fantasy, steampunk, fairy tales, and historical stories.