I love fairy tales and love writing stories adapting or subverting their tropes. But one thing you will never find me writing is stories about fairies, or even featuring fairies, because personally I can’t stand them and have no interest in writing about them.

If this may seem odd, consider the difference between a fairy tale and a fairy story. In his essay On Fairy Tales, J.R.R Tolkien defined a fairy tale as a story dealing with the land of faery and mankind’s relationship with it. They often work as cautionary tales about wandering into the realm of the fae and not being able to return to the ‘real’ world.

‘Faery’ is a fairly broad term but it generally refers to what ancient cultures believed was a world parallel to but connected to our own filled with other-worldly creatures. Fairies were one such creature, but not the only ones which were said to inhabit it.

By contrast, Tolkien defined fantasy as something set in an entirely invented world, like his own Middle Earth. More authors are making subversions by returning to the fae variety, but what we now call fairies tend to be creatures of fantasy rather than mythology. They tend to be small, humanoid beings, usually with wings and some form of magical powers. 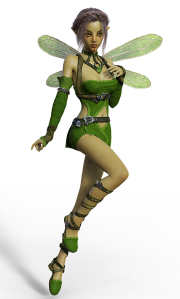 The reason these fairies never resonated with me is because each interpretation tends to fall into one of these categories:

1. Too generic. It’s difficult for me to love any fantasy creature if the author doesn’t do at least something new with it.
2. Too girly. Not that I’m against girly (I’m a big fan of My Little Pony) but so many writers try to make their fairies too saccharine and sweet, which makes me feel like they just vomited glitter all over the page.
3. Too bitchy. I guess this is supposed to be a subversion of the girly variety, but it tends to come across to me as making them overly mean for no real reason.

This doesn’t mean that I hate all stories with fairies, however. I like the weather fairies in A Tiny Snow Fairy Sugar and the sweets spirits in Yumeiro Pâtissière since despite being overly cutsy, they were still different than the standard fare and their story arcs were just as strong and significant as those of their human friends.

By far my favourite fairies in any form of fiction were the three good fairies – Flora, Fauna, and Merryweather – in Disney’s version of Sleeping Beauty. This is because they were well-rounded, funny, and interesting characters, in fact they were far more heroic than the incredibly bland and useless titular character.

While their magical powers were fairly generic and the film does rely upon incredibly black and white ideas of good and evil, the three of them avoided being either too girly or too bitchy by becoming developed characters rather than fairy archetypes. They had positive and negative qualities, they created some of the best comedy that’s ever been seen in a Disney film, they were loving to Aurora despite her complete lack of a personality, and when the time came to it they were completely badass. Really, the King and Queen should have given control of the kingdom to them at the end, since they were the only ones who had any sense (destroying all the spinning wheels in the kingdom both destroyed the economy and left everyone naked, your majesty).

The villainess Maleficent is also technically a fairy (which is why the re-make made her more like the fae variety) but also greatly different than most ‘bad’ fairies in fiction. True her motivation is for incredibly petty reasons, only because she wasn’t invited to a party, but she is still one of the most memorable villains that Disney has ever made. Even sixty years later, she is still the benchmark against which all other animated villains are measured. The strong characterisation of both the good and evil fairies is what makes Sleeping Beauty into both a fairy tale and a good story about fairies.

What are your thoughts on fairy tales and fairy stories? What are your favourite and least favourite fictional fairies? Tell me in the comments below!